(Hyattsville, MD)— On September 17 at a preview reception for Pyramid’s 40th Anniversary Exhibition: Reflecting Back to the Future, Pyramid announced that the gallery would now bear the name of its founder: Helen C. Frederick. 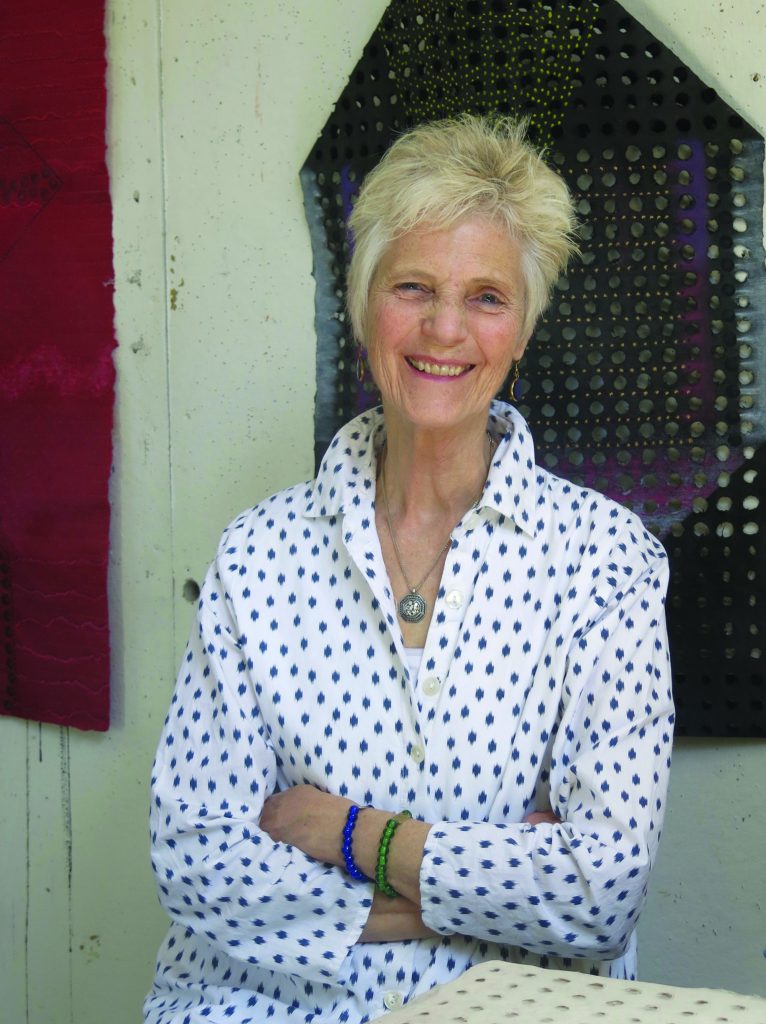 “Pyramid would not exist without the force that is Helen C. Frederick,” says Executive Director Kate Taylor Davis.
“Helen’s vision, passion, and tireless effort to create a collaborative art space is the reason we are here today.
The board of directors and staff felt that Helen’s name should be permanently attached to our programs
moving forward. The timing, on our 40th Anniversary and during a show that Helen is actually curating, seemed
the natural time to make the announcement.”

“The naming in the Pyramid Atlantic Gallery brings such joy to me, at a time when Pyramid is bubbling with creative energy, and exciting exhibitions in a space so intelligently guided by the directors Kate and Gretchen,” says Frederick. “Every opening, even with Covid, is bursting with attendees – new folks along with devoted followers. I am humbled and honored that my name will be part of this space, and know that Pyramid will continue to flourish for the next 40 years and beyond!”

Frederick’s founding of the arts organization began in the early 1980s and she led the organization until 2009. It had been her dream to set up a space for artistic collaboration with an active community of artists who could work together, create innovative discoveries in works on paper, and educate others.

“As an artist who could not see surviving alone, I felt that was what you were meant to do,” says
Frederick.

Frederick remembers paying $300/month in rent to Pyramid’s first location, which was in Baltimore. She built a board, grew the organization’s profile, and began publishing prints and books with artists. In 1986, the organization added a second location in Takoma neighborhood of Washington, DC. In 1990, Pyramid’s two locations found one home in Riverdale, MD. Under Frederick’s leadership, Pyramid did exhibitions and exchanges of artists between 16 countries
abroad, and throughout the US. It also created the first Book Arts Fair, hosted at the National Museum of Women in the Arts among many other accomplishments. In the early 2000s Frederick launched a capital campaign to develop a new home in Silver Spring, where Pyramid resided until its 2016 move to Hyattsville, MD.

As an artist, Frederick is well known for her hand-driven media, such as custom-formed paper, artist books, paintings, drawings, and prints that often incorporate the use of language. She also adapts electronic media and sculpture in her installations. Her work is included in the Whitney Museum of American Art, the National Gallery of Art, the Library of Congress, and the Smithsonian American Art Museum, and many other national and international collections.

Pyramid’s 40th Anniversary Exhibition: Reflecting Back to the Future is curated by Frederick and runs in Pyramid’s Helen C. Frederick Gallery through November 14, 2021. Exhibited works are part of a collection resulting from a printmaking and publishing residency that Pyramid operated from 1981-2007. Many of the prints have been in storage for decades, remaining unseen by the world at-large. Most of the works are for sale, with proceeds going to Pyramid Atlantic Art Center’s Next 40 Fund. Pyramid is located at 4318 Gallatin Street, Hyattsville Maryland 20781. More info at pyramidatlantic.org or 301-608-9101.

ABOUT PYRAMID ATLANTIC ART CENTER
Founded in 1981, Pyramid Atlantic is a nonprofit contemporary art center fostering the creative disciplines of papermaking, printmaking, and book arts within a collaborative community. We equip, educate, and exhibit in our historic Hyattsville home. Our vision is to create an artistic hub in Hyattsville that inspires and enables local, national, and international artists to create and innovate in our core disciplines; elevates the local arts and small business scene; and enhances the quality of life for artists and neighbors. We value artistic excellence, infrastructure for artists, hands-on experiences, and collaboration.

Learn more about our 40th Anniversary Exhibition, Reflecting Back to the Future, at the Helen C. Frederick Gallery at Pyramid Atlantic. >