English art critic John Berger once wrote that drawing is pure discovery.[1] For most of western art history since the Renaissance, it was the indispensable underpinning of all art. This skill, however, has been less and less necessitated or required. In the 1990s, even elite art institutions like Goldsmiths College in London abandoned life drawing classes. Video, conceptual art, performance art, digital art, and photography have made drawing seemingly less relevant. The show of lithographs and drawings by Wesley Clark at Pyramid Atlantic Art Center demonstrates a fresh take on drawing by an artist who has a conceptual underpinning but is also exploring the formal qualities and materiality of graphite.

In the work of Wesley Clark, who started as a painter, the viewer starts to understand drawings that took an hour and drawings that look like they took 1,000 hours. He began this series using one word to anchor each of his works. This process he likens to a thought exercise. The word becomes the focal point for a meditation, much like a breath or mantra. Nevertheless, that word may disappear as the layers, and varying degrees of graphite pressure and gestural erasure marks take hold. Ultimately, each piece becomes an evolved work that announces its “made” quality, its humanity. 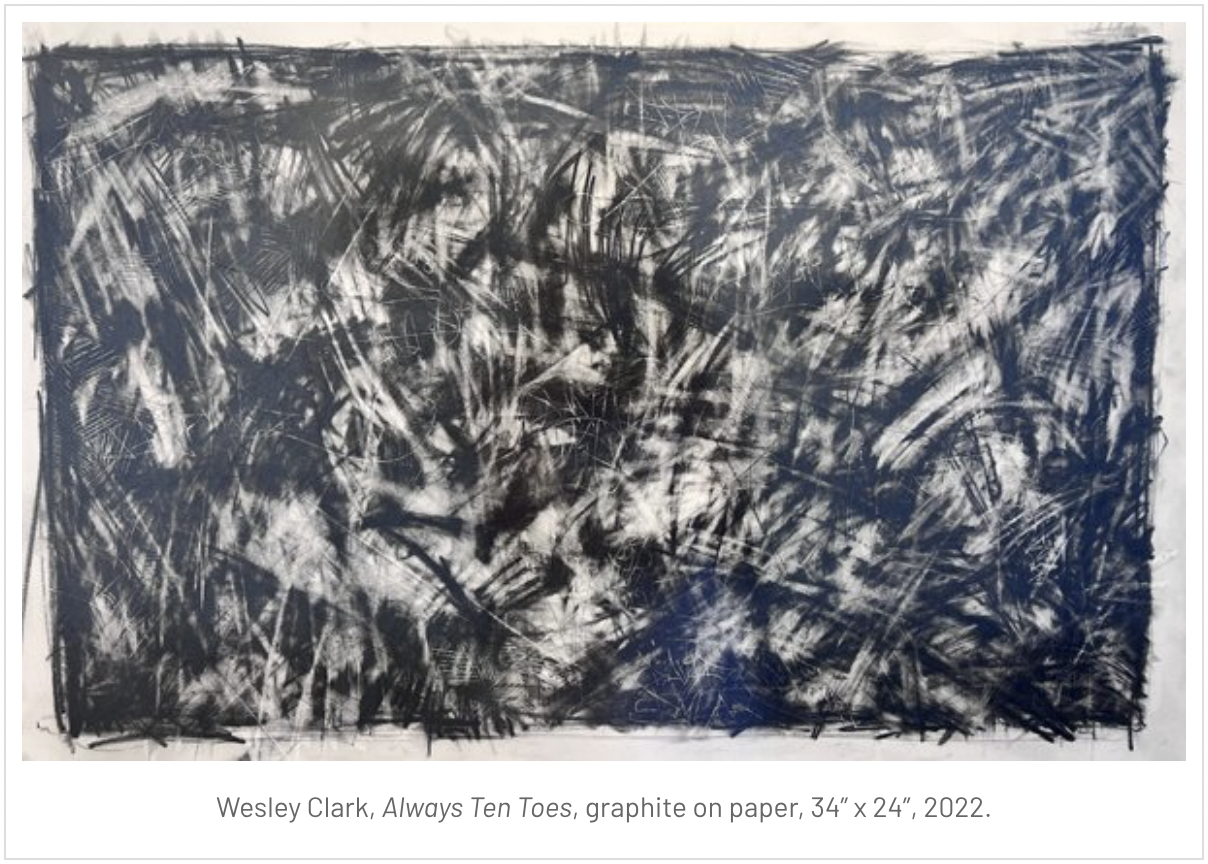 Always Ten Toes is a prime example of this. A series of energetic dark marks, sometimes covering and at other points being eclipsed by passages of erasure, dominate the work on paper. Despite three areas in the lower portions of the image starting to take shape, the work ultimately has all-over focus. There are light and dark areas and mid-tones created both with erasure and with lighter pressure of the graphite. Sticks are employed to scratch the surface and form decorative “word-like” scribbles.  Clark creates depth in a way that an abstract expressionist might, only without using the push-pull theory where warm colors advance in the atmosphere while cool hues recede. Instead, he calibrates the value of the graphite, and sometimes the darks push forward, while other times they seem to recede beyond the marks made by the erasure, and vice versa. In effect, so much is going on throughout one’s eye moves in every direction. The layers create a constant pulsing. When an artist works like this, the use of different textures and, in this case, different pencil and paper techniques are revealed. The time and effort in these works display the artist’s total investment in the process.

Fortitude is an arresting diptych in graphite darker than fresh asphalt. At first glance, the work appears both meditative and sumptuous. The viewer can appreciate the luxuriation in the medium and the seeing of what it can do; its complete coverage in graphite, its passages of shine, and the luxury of time in its making.  A closer inspection reveals that the work is not “just black”; there is texture and depth. Letters with an embossed appearance to them emerge suggesting what seem to be multiple aspects to his process, including razor layering.  As in a cubist work, the letters and words appear and then recede slightly out of grasp, where no single interpretation is stable. Those viewers who hang on and work hard to decipher the  surface will realize that the work is not so much about luxury as it is about the Fortitude of the title. It no longer is solely a meditation; the words make it clear that it took both kinds of fortitude to make it.  It took fortitude in the civil rights era to persevere. The subject of the  diptych is both the fortitude of its own making and the story embedded in its layers. There is an adage that the minimalists felt that paintings portray something, and sculpture is something. Well, this work does both. 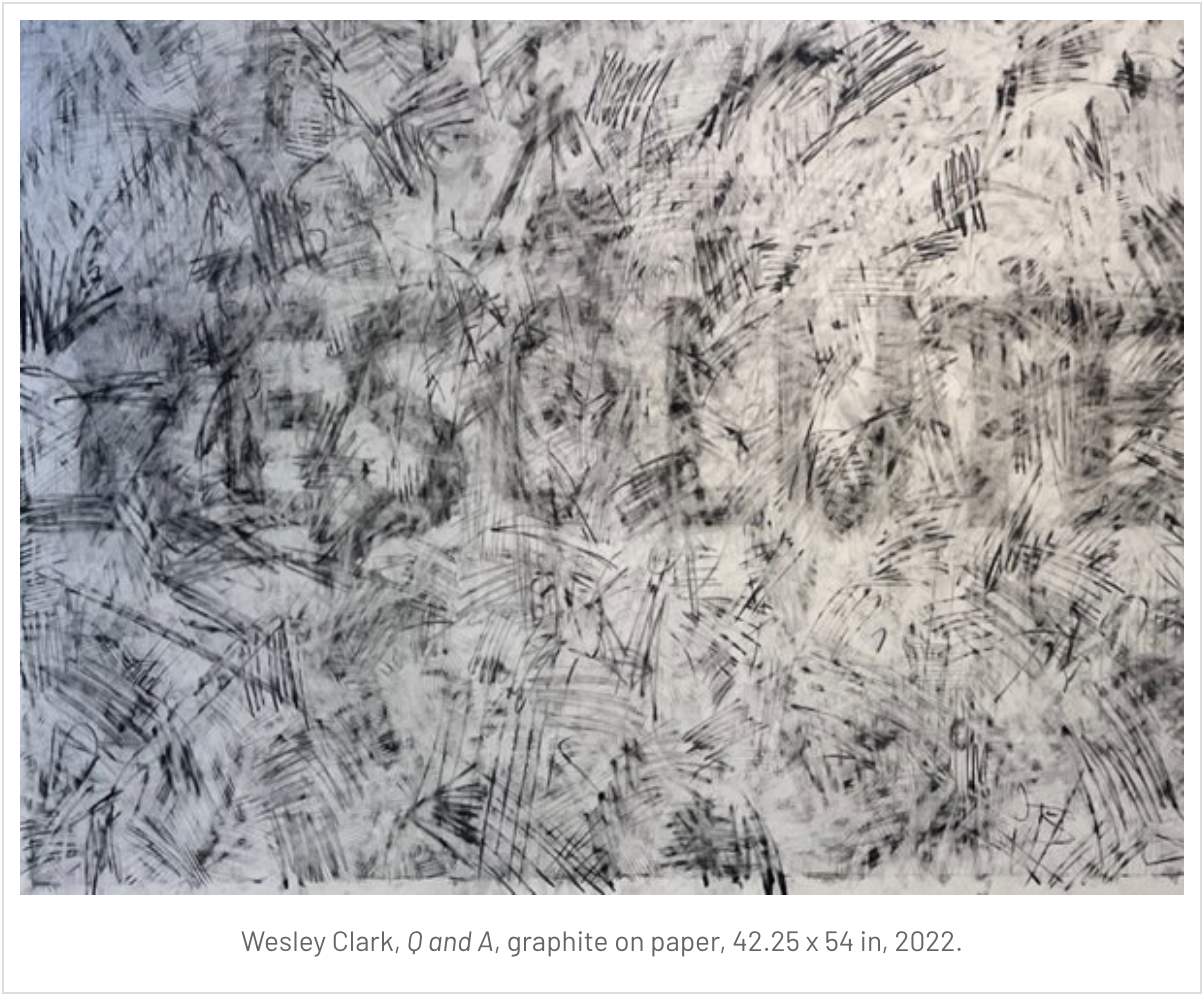 While Fortitude compels the viewer with its exploration of what variation can be found in the darkness of graphite, Q and A (graphite on paper, 2022, 42.25 x 54 in) attracts the eye because it is so different from the other drawings. When looked at from a distance, it appears composed solely of the paper’s whiteness and subtle gradations of light grays. As one looks more closely, one sees that it is forcefully structured with marks. Light graphite crosshatches cover the paper in patterns and lend a sense of rhythm to the whole. Then darker marks are layered and erased in parts over the centrally placed word—”RESOLUTE.” The outlined text has erasure markings surrounding it to give it form. Again, we see Clark’s “push/pull” version of depth. The viewer may focus on one dark line, and as they follow it, it blinks out like a star. Looking at the varied marks is like seeing pentimenti (or artist made changes on the surface of a painting) with the top layer of paint removed. How Clark engages elements and principles of art for balance, depth, texture, motion, focus, value and emphasis is a fascination of his work. Each work leads to resolution and meaning in different ways. 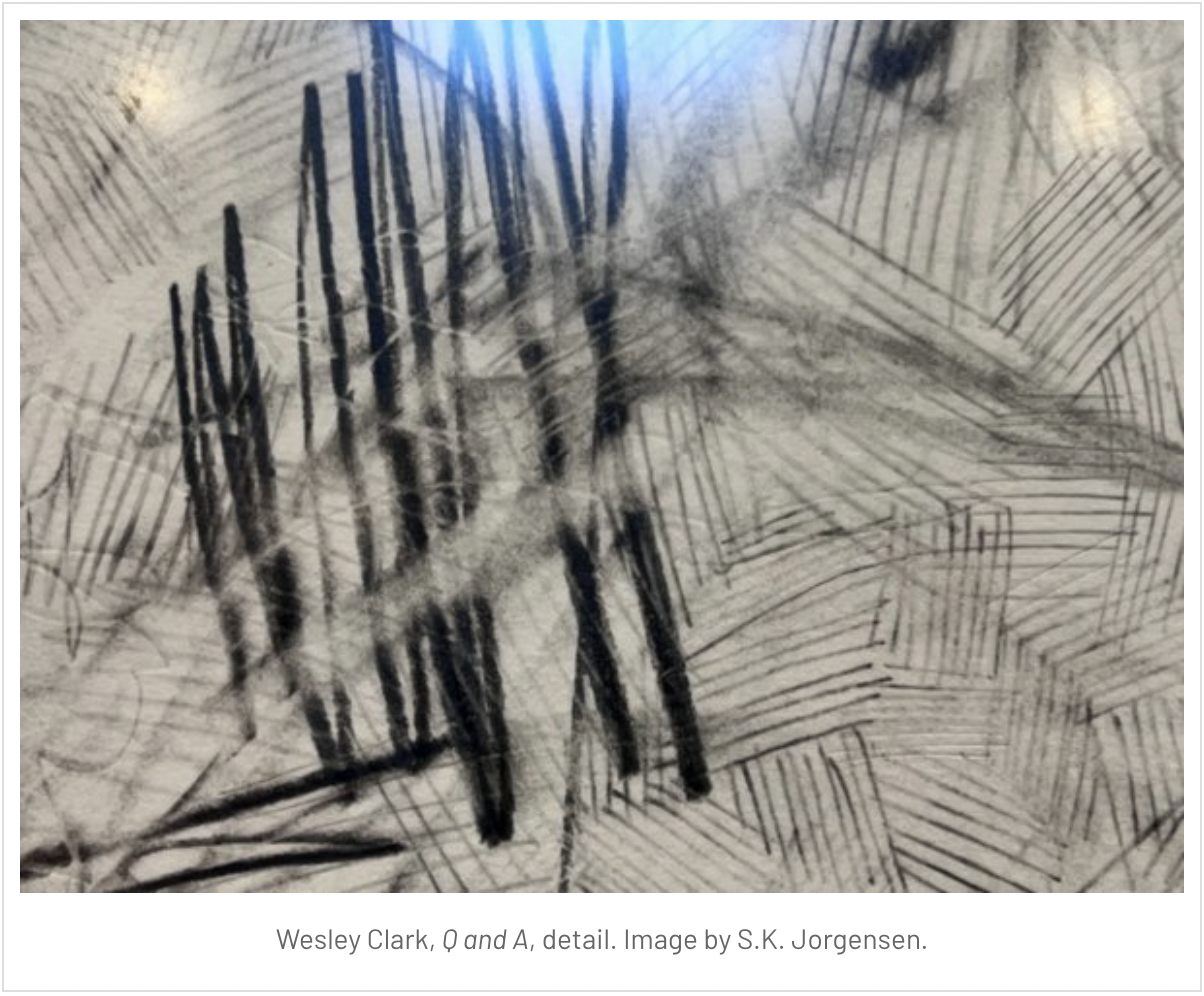 Q and A has the structured improvisation of a Charlie Parker, Four Options, really only two at first appears to be an unrestrained Ornette Coleman solo. For one thing, dark tones predominate with intense and seemingly haphazard gestures. 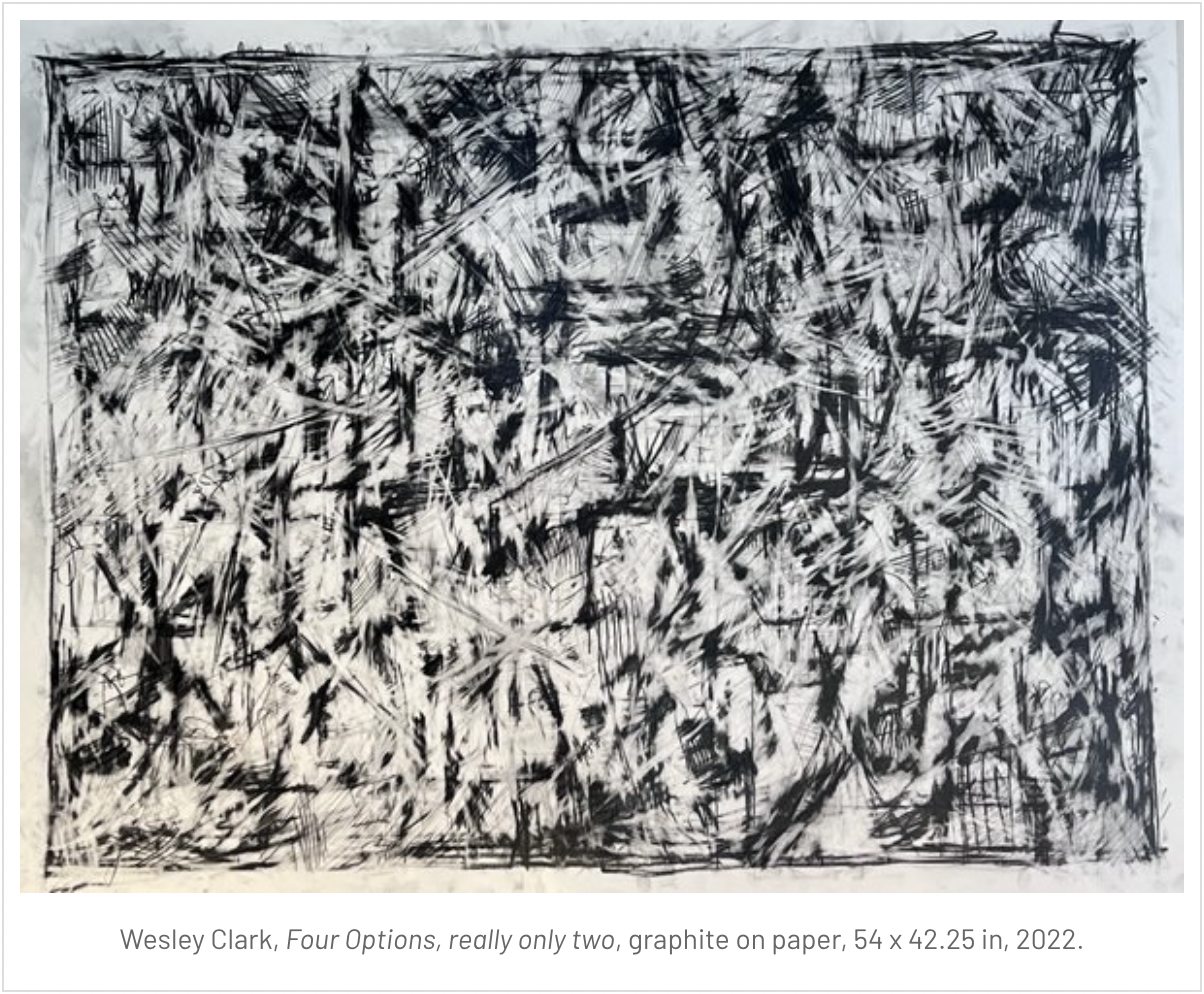 Swift diagonals in light, dark, and mid-tones move across the page, exuding motion. Like Q and A, the overall substructure of crosshatching balances Four Options, really only two. It is equally balanced with the strokes of the artist’s hand. The energetic nature of the strokes might inspire an observer to compare this work to gestural abstraction. However, unlike Pollock or Kline, he is not locking his arm and making grand emotional movements. These marks are tight, contained, and made with the wrist. These are intimate strokes. Some may see aggression in some of the strikes made with heavy pressure.  I don’t. But even if so, it is channeled. Throughout the drawing, ghosts of delicately defined words project forward and fall back. The show proves that no singular conclusion can be made about Clark’s layered and gratifying works.